The trend of foreign trade in 2021 maybe like this! 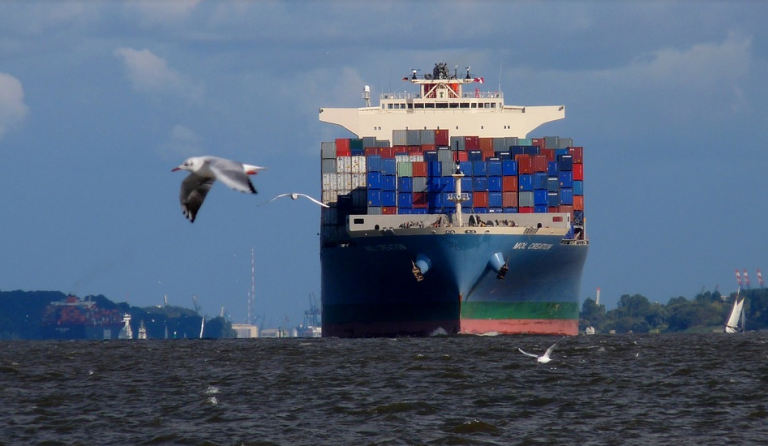 Looking back on 2020 is a very special year, it can be said to be the downturn of the world economy, and even survey results show that the economic downturn in 2020 is lower than the previous economic crisis.

Speaking of products that have been sold out, everyone must have heard this saying: “masks in February, forehead thermometers in March, meltblown cloth in April, helmets in May, bicycles in June, clothing in July, Small appliances in August, furniture in September…

In 2020, these industries that suddenly exploded orders are without exception because the epidemic has changed their lifestyles. Therefore, we can use the trade data in 2020 to speculate on which development trends in 2021 are worthy of our attention. 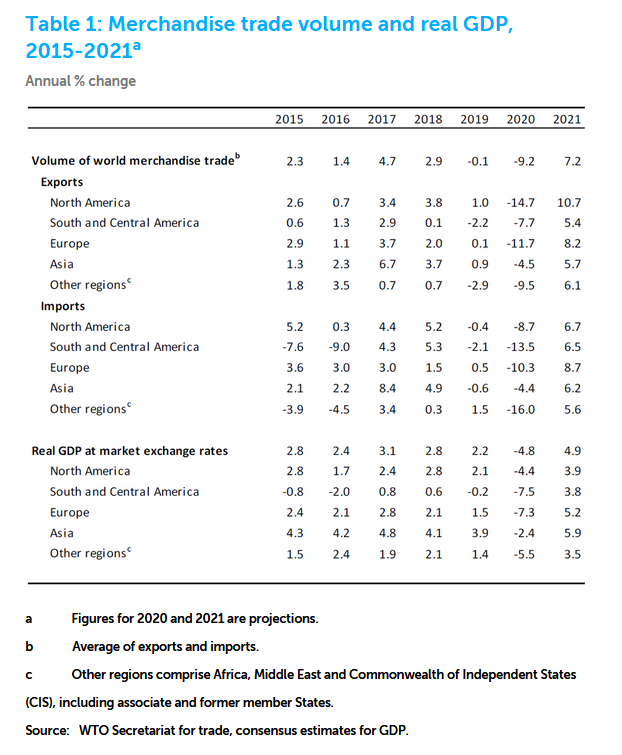 According to WTO statistics “Table 1: 2015-2021 Commodity Trade Volume and Real GDP” (where the data in 2020 and 2021 are forecasts), it is expected that the total import and export volume of all regions will increase significantly in 2021, but we need to pay attention The thing is, the base of this growth will decline. Therefore, even a large percentage change cannot be translated into better economic conditions. For example, imports from Asia and South America are expected to grow by 6.2% and 6.5% respectively in 2021, but imports from Asia will grow after a modest decline of 4.4% in 2020, while imports from South America will grow after a sharp drop of 13.5% in 2020. Under such circumstances, imports from Asia will recover substantially, while trade in South America will remain severely depressed.

According to WTO forecasts, no matter how much the growth is in 2021, it will be difficult to return to the growth trend before the epidemic, and these forecasts are still highly uncertain because they are affected by the epidemic and the state of epidemic control by countries.

The economic recovery in 2020 is basically due to the epidemic, and demand has been compressed. From a large-scale demand concentration to a small-scale demand, the emergence of the “home economy” is precisely because the epidemic has compressed demand. 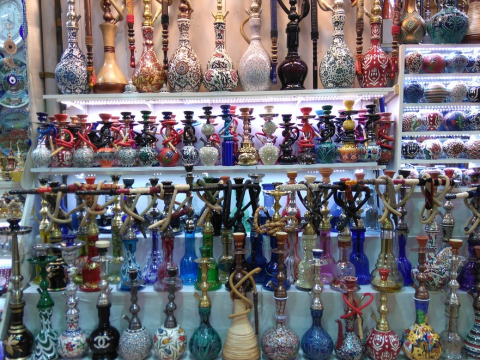 In 2021, Asian countries may be the main force in the foreign trade market

According to the General Administration of Customs, the contribution of the ASEAN market to the recovery of the foreign trade economy in 2020 is more obvious than that of other regions.

In particular, the signing of the RCEP agreement provides more convenient conditions for trade with Asian countries.

According to WTO data “Figure 3: Commodity Imports and Exports in Various Regions”, Asia’s import and export performance has surpassed that of North America and Europe in the past eight years.

According to WTO data, in the second quarter of 2020, global merchandise trade experienced the largest single-quarter decline in history, a 14.3% drop compared with the previous quarter. The largest decline was in Europe and North America, where exports fell by 24.5% and 21.8%, respectively. In contrast, Asian exports were relatively unaffected, falling by only 6.1%. In the same period, imports from North America and Europe fell by 14.5% and 19.3%, while imports from Asia fell by only 7.1%.

It can be seen that the trade situation in the Asian market has not only been showing growth, but the impact of the epidemic is also much smaller than that of other countries and regions. Relatively speaking, the Asian market is more stable.

In 2021, the performance of various products 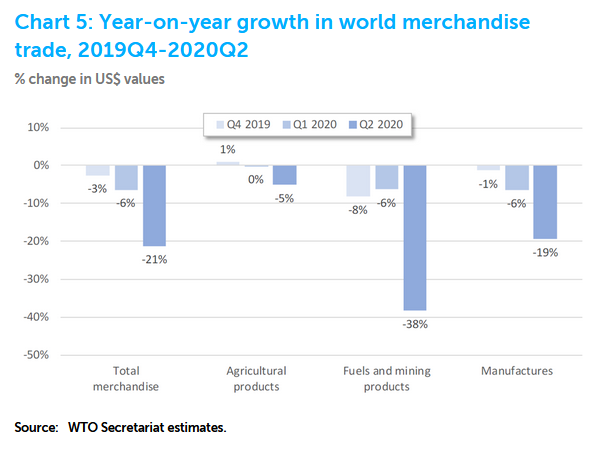 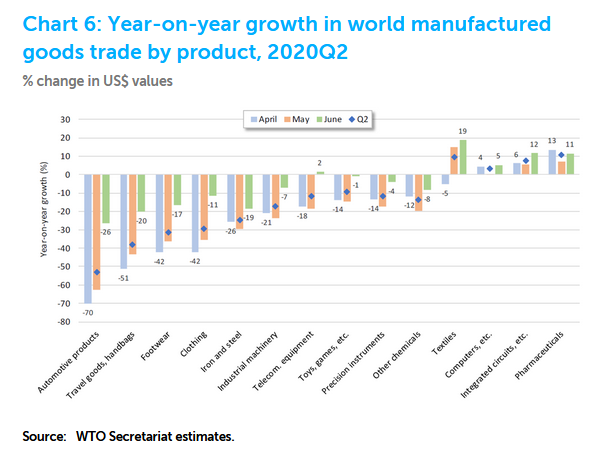 From the first chart, we can see that the decline in agricultural trade in the second quarter was lower than the world average (-5% versus -21%), because even under the strictest lockdown conditions, food is still produced and transported. necessity. At the same time, the trade in fuels and mining products dropped sharply (38%) due to the plunge in prices and travel restrictions that led to reduced consumption. The decline in trade in manufactured goods (-19%) is comparable to the decline in overall merchandise trade.

Figure 6 shows that most manufactured goods trade bottomed in April and then began to recover in May and June, but the recovery was partial and incomplete. Automotive products recorded the largest decline in all categories (70% in April), partly due to supply disruptions and partly due to insufficient consumer demand. As of June, trade in auto products has rebounded, only down 26% from the same period last year. For the entire second quarter, the transaction volume of such products fell by 53%. Travel goods and handbags also showed a sharp decline in April, because such goods contain a large part of luxury goods, and consumption of luxury goods tends to rise and fall with the business cycle.

As of June, the trade in telecommunications equipment, including smartphones, had increased by 2% from the same period last year. During the crisis, trade in other types of electronic products also increased, as households, businesses, and governments upgraded their computer and information technology infrastructure to promote home office work.

At the same time, as countries obtain basic products from foreign suppliers, pharmaceutical trade has increased during the epidemic. Among them, the personal protective equipment trade has seen explosive growth, with a 92% increase in the second quarter and a 122% increase in May. This is a vivid example of the positive contribution of trade to the fight against the epidemic.

In 2021, the development trend of foreign trade may be like this

Please view the full version of the WTO Analysis Report:

According to WTO data and analysis, we can probably predict the trend of foreign trade development in 2021.

General direction selection: There is a large demand base, such as daily necessities, or fast-growing industries, such as protective products, all have potential;

High-consumption industries, such as the automobile industry, including the auto accessories industry, may be hit. Automobiles are high-consumption and travel products. Due to the impact of the epidemic, demand in this area will be greatly reduced;

The agricultural products industry and food industry will continue to grow slowly, and products that meet basic physiological needs will not be greatly affected;

Looking at international trade from the perspective of a local Chinese container manufacturer,
Follow us and share the latest and most authentic Chinese industry information to you.